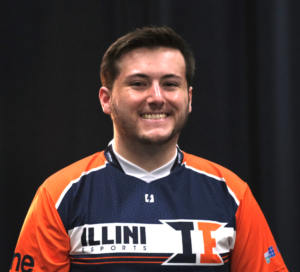 Meet Max “mac” Cincinnati, the Smite Coordinator for Illini Esports! He’s from Rockford, IL and is a senior here at the University of Illinois at Urbana-Champaign, graduating with a Bachelor’s Degree in Materials Science and Engineering.

Max has been playing competitively ever since coming to the University. He started on Overwatch, but then switched over to become fully committed to competitive Smite. Last year, his team played in two tournaments, PlayVS and AVGL, and won first place in both with a total prize of $1500. This is Max’s favorite memory from Illini Esports, as he never expected that he would win money from playing a video game.

As the competitive coordinator for Smite, Max schedules games, reports game results to Illini Esports and tournament organizers, and makes sure that people show up to practices and games. As part of the community, he hosts weekly/bi-weekly events to bring people together and bond over Smite.

Smite was one of Max’s first Multiplayer Online Battle Arena Video Games (MOBAs), and he has played for a whopping 3,961 hours. Alongside Smite, Max also plays Valorant, osu!, Minecraft, Destiny 2, and other games in his free time. He finds games that are team-based to be especially fun because he likes the idea of working together as a unit to win. However, he says that learning a new game takes a lot of time and dedication, which is difficult to balance with schoolwork.

Max describes Smite as a 5 vs 5 battle game similar to League of Legends. Games are won by defeating the enemy players and fighting over objectives. The game’s vast selection of characters are referred to as mythological gods from varying pantheons, including Chinese, Hindu, Japanese, Greek, and Roman. His favorite thing about Smite are the diverse abilities amongst the characters, creating various ways that each game can play out.

While Max is enthusiastic about Smite, he believes that the game has some room for improvement. He wishes that Hi-Rez, the studio that developed Smite, would advertise the game more as it does not attract many new players. He also wishes that the games would last longer to place a heavier focus on teamplay more.

An interesting fact about Max is that during his senior year of high school, he would post videos of himself pranking his dad on TikTok which have accumulated over 1 million likes. His videos are still viewable at ‘macmanbad’ on TikTok, showing a glimpse into his brief era of stardom. Currently, Max does not use social media anymore. He likes to keep a low profile and does not think that being a social media influencer is for him.

Max is doing his best to find people who would like to give Smite a chance and join the team. The Smite community is small, but they are very accepting for those who want to play and learn all about Smite. Feel free to message him on Discord at ‘mac#3391’ for any questions that you may have! You can also watch one of his tournaments on Youtube here.

Thanks again to mac for taking the time to interview with Illini Esports and share some of his experiences with the community! To learn more about our other fantastic players and the teams they play on, be sure to follow our Twitter and Instagram pages and get the most up-to-date content. If you are interested in joining the community and receiving live competitive reports as they happen, be sure to join our Discord. We hope to see you there!